How are you today? I wanna know who here did something for themselves over the holidays?

I’ll say it and be that mom—I’m excited my kids are back in school and regular routines. Even after winter break was over, we experienced another week off for snow…in North Carolina. Now I get to be selfish and have me time. Raise your hand; anyone else feel that way too? Because if we keep having snow days I’ll be looking for the closest band of Gypsies to give my kids too.

However, I won’t lie. After it all, I was actually a little glad I got to spend some more time with them. It might have been because I got to sleep in an extra 5 minutes; but I honestly think I was sorta kinda excited to spend a little more time with my kids. Anyways, I’m here to talk to you about A New Year; A New Perspective.

Let me ask you this….

1. How many of you have ever set a new year’s resolution in their life? 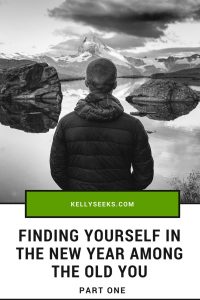 2. How many of you have made one for this year?

I used to make resolutions.

Then I would do ok keeping them.

Then I would fail at them.

Then I would be stressed that I failed at them.

Then I would be disappointed in myself for 11 more months; until I promised myself I would do better next year.

Annnnd, I wouldn’t do any better. Until one year I realized that all I was doing was making promises to myself I knew I would not keep.

Why was I torturing myself? Why was I setting myself up for failure over and over?

So I decided a few years ago to try something new each year to improve myself. One year, I didn’t make any resolutions or do anything. Like nothing. Acted like it was a normal day. However, that didn’t make me feel good either. So the next year I took part in the #oneword movement.

I picked “present” that year. I wanted to be more present in the lives of the people around me. I felt up until that point, that I was stepping away from quality time with family and friends because I was too involved with my phone, computer or obligations. So I stepped away from some volunteer responsibilities, put my phone on a constant silent mode and put the laptop upstairs (because half the time I’m too lazy to walk up those stairs). In that year alone, I felt I became closer to my family than I had ever been.

So this year I picked another word, but I also decided to do something else different. Or maybe I was just paying attention this time when He was speaking to me. However, before I start talking about what He said; you first need to hear about my 2017.

and I wish I could relive it again and again. But one thing you need to know about me it is that I wear my emotions and feelings on my face…and my arm…and my legs… you get the point. I am an easy read. So here is the truth (bear with my whining)-

It was a crap year. But 2017 took the prize for the worst year I have ever had. It brought financial hardships (more than once), it brought me having to deal with tough family decisions here and not there (military gals will get that), the year brought immense feelings of loneliness and abandonment that I have never experienced before. I have never felt I had disappointed people as much as I had last year. I felt belittled, dumped on and torn down by people I care about most, to the point that I became withdrawn and stopped hanging around people. I felt unloved, unnecessary and unneeded.

Then New Year’s 2017 I laid in bed at 1130pm with my husband laughing at the fact we cared less about staying up for another 30 minutes. In fact, for the past 10 years we haven’t stayed up until midnight. I often think by the time our kids are grown and we don’t have to get up early with them the next morning, we won’t have any energy left because we will be too old!

So I laid there in bed passing the minutes until the next year came reflecting on everything that happened in 2017. I thought 2018 could not possibly be that crappy. There simply can’t be a repeat. God couldn’t possibly let more bad things happen. But a new perspective hit me- I couldn’t solely place all the blame on Him. Galations 6:5 “For we are each responsible for our own conduct.”

Yup, last year was bad. However,

I realized that night I only felt it was bad mainly because of my own actions and outlook. Marcus Aurelius once said,
“Very little is needed to make a happy life; it is all within yourself, in your way of thinking.”

Not only did I have my #oneword, I had a new view. But life happens when you are busy making plans.

To not bored you so much; I plan to spread out the rest of what I want to say. It will include insights to a new way to look at life, some advice from a seasoned mom, and a way to put it all together.